The Manora fort is situated 65 km (40 mi) away from Thanjavur, Tamilnadu, India. The fort was built by Maratha ruler Serfoji II in 1814–1815 to commemorate the successful advance of the British over Napoleon Bonaparte. It is an 8-storied, hexagonal tower, which is 23-meters high overlooking the Bay of Bengal. The fort derives its name Manora, from the word Minaret. In December 2004, five monuments including the fort were damaged in the Indian Ocean Tsunami. 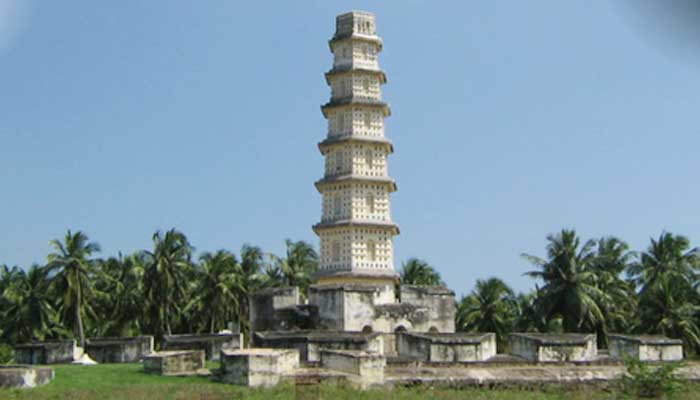 It was planned in 2007 by the State Tourism Department to renovate the structure and improve its infrastructure by building several additional facilities including upgrading the children's park and buildi ng a tourist's shed. Manora fort is 20 km away from the town of Pattukkottai in Thanjavur district of Tamil Nadu. The fort is picturesquely located in lush greenery surrounded by swaying coconut palms, overlooking the azure waters of the Bay of Bengal. You can’t miss it with its 8-storey, 75-feet high hexagonal tower soaring towards the sky. The tower, which is a striking blend of different architectural styles, is surrounded by a moat and offers stunning views of the sea and the surrounding dense green coconut groves. 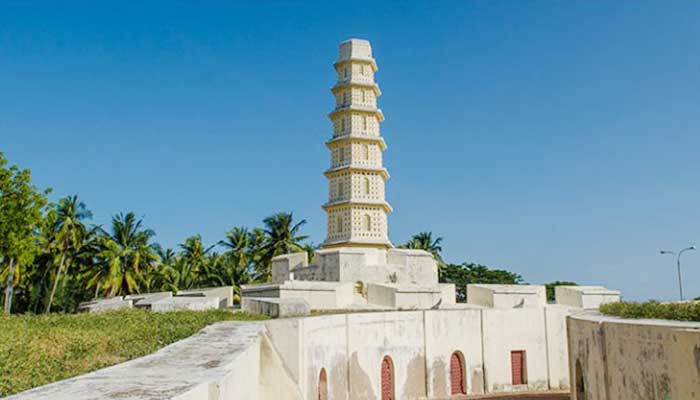 Locals claim that in the olden days, the Fort overlooked Sri Lanka, a claim unproven so far. Manora was earlier an important port and a center for ship-building. Manora Fort was a summer palace for the Maratha kings and the moat, which had sea water, provided drainage facilities to the fort. There are rest shed surrounding the moat and in olden days, soldiers who guarded the fort, used to stay in these sheds. There were hanging lasers that were used to reach the fort. Manora Fort has been declared a monument and was handed over to the Tamil Nadu Archaeological department.

The fort was built by Maratha ruler Serfoji II (1777-1832 CE) in 1814–1815 to commemorate the successful advance of the British over Napoleon Bonaparte (15 August 1769 – 5 May 1821) in theBattle of Waterloo in 1815. The fort acted as a residence for the royal family and also as a light house. A stone inscription reads “a friend and ally of the British to commemorate triumphs of British Arms and downfall of Bonaparte”.

The inscription inside the tower states that Serfoji II constructed this memorial tower, to commemorate the British victory over Napoleon Bonaparte. In 1964, the Nayaka throne was captured by Ekoji, also known as Venkoji, the younger half-brother of Chatrapatti Shivaji; Thanjavur thereupon became the capital of an independent branch of Maratha Empire established by Shivaji. Among the Maratha rulers at Thanjavur, Sarafoji II, who reigned from 1798 to 1833, was the most interesting. 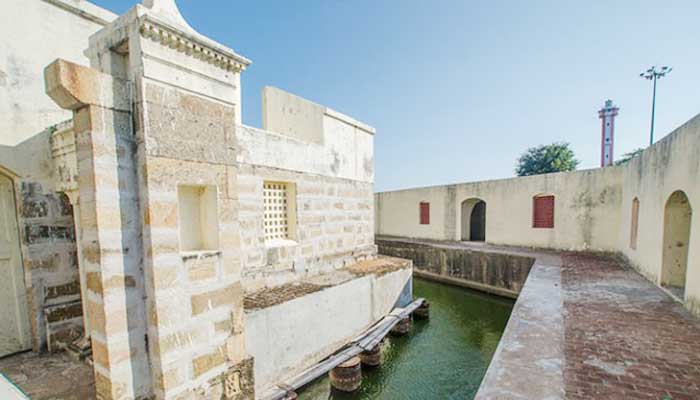 Sarafoji II ruled over Thanjavur at the time of its decline. In 1799, he entered into a subsidiary alliance with the newly emerged English power. After the death of his successor, Shivaji II in 1855, Thanjavur was annexed by the English along with other princely states like Jhansi in Uttar Pradesh.

Sarafoji's contribution to culture was immense. Well versed in Indian and western learning, he collected manuscripts, paintings and artefacts and established a library known as Saraswathi Mahal Library at Thanjavur.

Legend has that the traders from Sri Lanka used to come to Manora to trade goods with their Indian counterparts. To add spice to it all, the story goes that Serfoji hid a treasure in the secret maze within the fort. There is supposedly an underground passage that goes from Manora to the main temple in Thanjavur.

There stands a rather splendid and unique tower at Manora, a few kilometres southeast from Orathanadu, on a deserted stretch of coastline on the Bay of Bengal. It is 65 kilometres from Thanjavur and 20 km from Pattukkottai, and is situated at Mallipattinam alias Sarabendra Rajanpattinam. The name Manora is derived from the word "minaret" meaning small tower.

The tower stands within fortified walls and a moat. The multi-storeyed and tapering tower rises to a height of 22.30 metres. With its arched windows and eaves that separate one storey from the next, the monument resembles a pagoda. 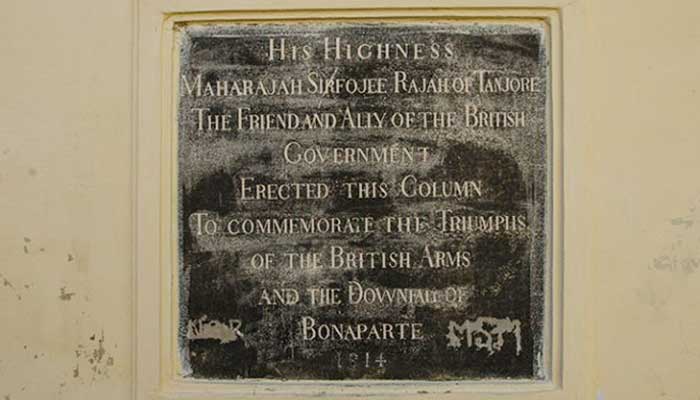 The 140 ft. monument stands majestically on the shore amidst lush green coconut groves. Looking like an ancient lighthouse, the tower was built by King Serfoji in 1811 to commemorate the victory of the British army over Napoleon Bonaparte, in the historic battle of Waterloo. The Maratha Kings used the fort as a summer palace. The moat with sea water is provided with drainage facility. Rest sheds surround the moat; soldiers who used to guard the fort stayed in these sheds. Hanging lasers were used to reach the other side of the moat.

Graffiti on the walls of the fort has defaced it. Some of the portions have given way and the sheds are not clean. The sea water in the moat is highly polluted. Though the fort was declared as a monument and handed over to the Tamil Nadu Archaeological department, little had been done by the department to protect the monument. Now the Government has sanctioned Rs. 6 lakhs for the work which the Department of culture will take up. The tourism department is very keen to develop the place into a tourist spot. 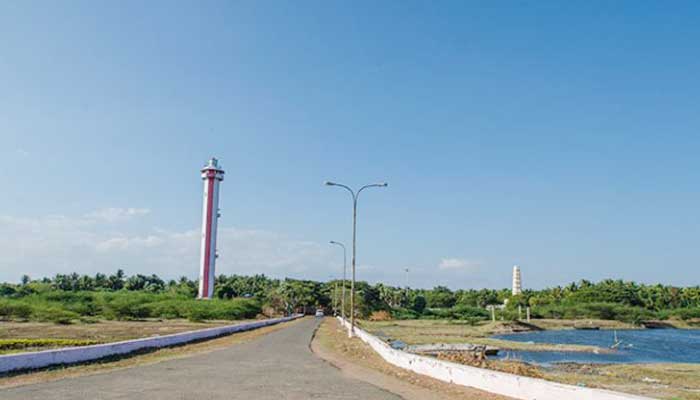 Manora Fort, with its rather striking stone edifice and sylvan settings is most certainly worth visiting. With its tales of hidden treasures and secret passages, it makes it all the more attractive and mysterious. The fort is a great example of Maratha architecture.

Unfortunately, visitors are allowed to go only up two storeys within the fort because the authorities fear that thanks to extensive damage, there is a danger of the tower collapsing. But even climbing two floors gives you such awesome views of the cobalt seas and the lush coconut groves that it’s worth the visit.


The restoration and conservation of the monument was started in 2000 and completed in 2003. Tourists are allowed access up to the second level of the fort. A considerable part of the fort was damaged during the Indian Ocean Tsunami in 2005. The Tamil Nadu state Tourism Development Corporation allocated ₹3195000 (US$47,000) for improving the infrastructure around the fort.

The project was to develop children's park to have additional facilities, provide additional lighting, install display boards, plant saplings along the road, lay new road from Sethu Road to the fort and modify thatched umbrella roof structures on the beach. The fort is one of the most prominent tourist attractions in the district.

Visitors are allowed to climb up to the second storey of the tower and no further. Even from this vantage point the view is spectacular. There are stories about an underground tunnel that leads from the tower to the Brihadeeswarar Temple. This and the many other stories attached to the place is what keep drawing tourists and visitors to this place.

The Manora fort is situated 65 km away from Thanjavur, Tamil Nadu, India.

Tiruchirapalli International Airport (located about 111 km.) is the nearest airport to reach Manora Fort. Visitors can book prepaid taxi or take a bus from the airport to reach this majestic fort conveniently.

Thanjavur Railway Station (located about 68 km.) is the nearest railhead to reach Manora Fort. Regular trains from Chennai, Mumbai and Delhi are available. Visitors can take a bus from the station to the fort.

The city has excellent roads. Buses and taxis are available to reach Manora Fort from nearby cities like Trichy and Madurai.State transport buses are affordable and convenient alternative.