Our Lady of Lourdes Basilica, Poondi, is a Catholic pilgrimage center located in Tamilnadu, South India. Poondi is a small village located near Tirukattupalli in Thiruvaiyaru Taluk (also spelled as Taluka), about 35 km away from Thanjavur. Poondi is usually associated with Alamelupuram village located besides the Basilica and so is called as Poondi-Alamelupuram, officially.

Poondi is a small hamlet sandwiched between the rivers Cauvery and Coleroon Alamelupuram. Poondi is believed to have got its name from Poondu, a shrub in Tamil, which grew in abundance here earlier. The hamlet is significant thanks to the renowned Poondi Madha Shrine (The Shrine of Our Lady of Poondi). 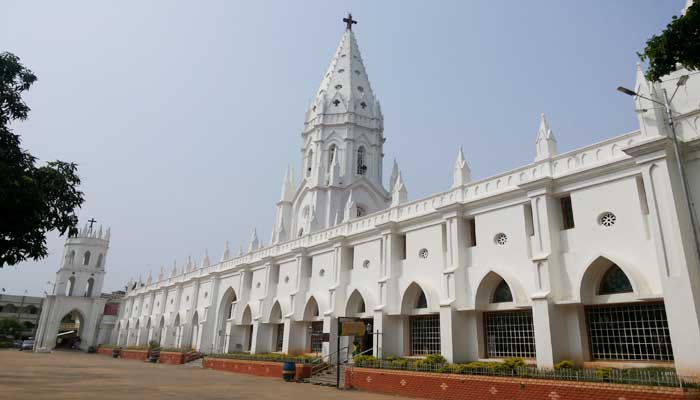 Poondi Madha Shrine is an important pilgrim spot for Roman Catholics and is almost as famous as Velankanni, which is also in Tamilnadu. Thousands of devout worshippers from across India throng to this church with an unshakeable belief that their prayers will be answered. The church is an imposing and elegant building and stands tall and proud; you can’t miss it from a distance because its tall towers reach out to the sky.

Rev. Fr. Constantine Joseph Beschi S.J., popularly known as Veeramamunivar an Italian Jesuit missionary and Tamil Scholar, built the Church of Mary Queen of Immaculate Conception between 1714 and 1718. Poondi Madha Shrine was officially classified a Minor Basilica by Pope John Paul II on 3 August, 1999. Veeramamunivar authored many Tamil literary works including the famous Thembaavani and Paramartha Guru Kadhai. He holds a special place in Tamil culture and the Tamil Nadu government has honored him by erecting his statue on the popular Marina Beach.

Within the dome of the church is the statue of the miraculous Lady of Poondi. This extraordinary statue is one of the three statues that were completed in France after the apparition of Our Lady at Lourdes and was brought to India by Rev. Father Darres. According to available records when the French Missionary Fathers (MEP Fathers) where taking care of the Pastrol Mission in Kumbakonam Diocese, Father Mette Louis Jules started a Catechetical School in Poondi around the year 1900 to train Catechetics. 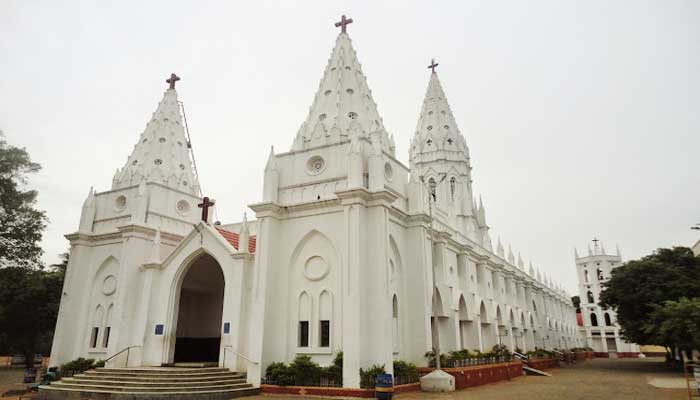 The Holy Mother appeared to Bernadette in 1858 in Lourdes in France. Statues of Our Lady of Lourdes were sent to different parts of the World. Out of the three statues that came to India, one was brought to and remains in the Poondi Shrine. This statue is so unique, that while looking at it, one gets a feeling of looking at a live person. Since the time the statue was installed in the church, a mysterious brightness has been filling up the entire church during night time. People started special devotion to Our Lady and several miracles started happening here, which continue till day.

Rev.Fr.Lourdes Xavier after being appointed as Parish Priest of Poondi on 1st September 1955 gave immediate attention to improve the condition of the Church, the central roof of which was in a bad condition and it was feared that it might collapse at any moment causing great damage. So he consulted an engineer. They wanted to demolish only the central roof without any damage to the front elevation, the doom and the altar. Fr.Lourdes Xavier was worried as it would cost too much and it would be beyond his means to find the necessary funds to reconstruct the Church. 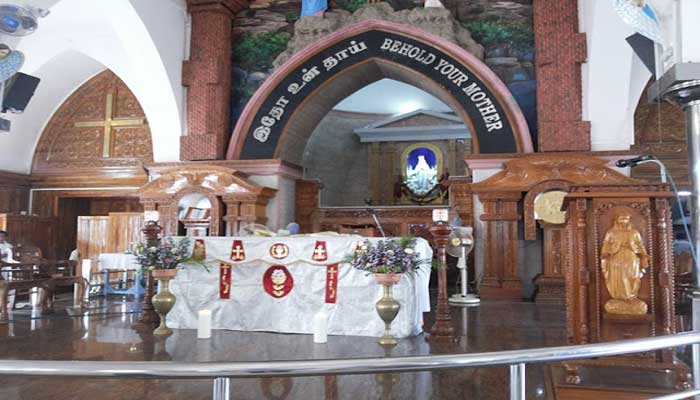 Not having sufficient funds to carry out the repairs, he fasted and prayed to the Holy Mother for 15 days. On the 15th day morning, he heard an inner voice and told the people that the front portion of the church would come down on its own by that afternoon. Exactly as he said, the building collapsed. This happened on 22nd November, 1956 and the reconstruction was completed by 2nd May 1964. This is vividly remembered and described by people even today.

A small piece of the original cross of Jesus was brought to the church by Rev.Fr.Rayappa in 1976. One can see this below the Statue of the Holy Mother. Several thousands of devotees throng the Poondi Madha Basilica on September 8th every year, the Birthday of Our Holy Mother. A procession is taken out in an ornamental chariot which is witnessed by people irrespective of caste and religion, who gather and pray here on this auspicious day.

The church has a membership scheme whereby one can pay as less as Rs.100 as a monthly subscription. When the amount reaches Rs.5000/- the person becomes a life member and the person is remembered and prayed during every mass offered in the shrine.

His Eminence Simon Cardinal Lourdusamy declared the Shrine of our Lady of Poondi as a permanent pilgrimage center of our Lady of Immaculate Conception. On 03.08.1999, the shrine was declared as Minor Basilica by Pope John Paul II.

The present structure of the shrine has a mixture of Gothic and French architectural styles. The facade above the portico has a row of statues of the Twelve Apostles, St. Francis Xavier and Fr. Constantine Joseph Beschi.

There is an imposing statue of Father, Constantine Joseph Beschi in front, above the portico. The church has a relic of the True Cross, believed to be the one on which Christ was crucified. 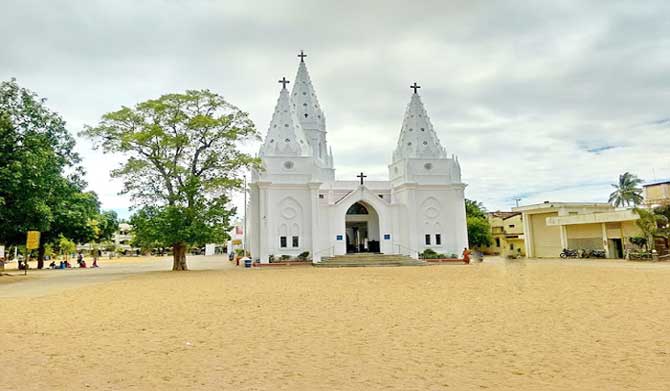 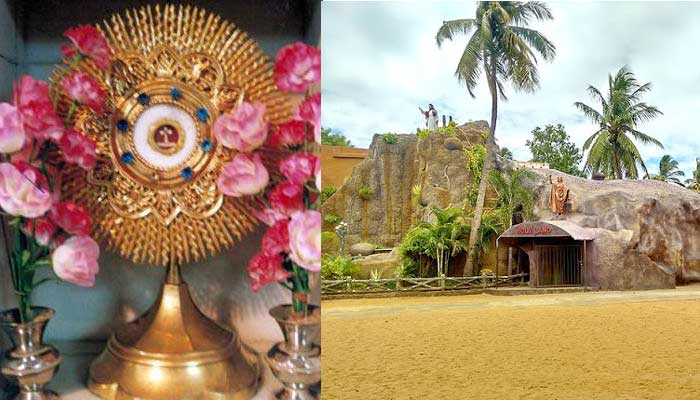 Relic of the Original Cross & Museum

This Church has a small museum showcasing its history and collections. It has an interesting collection of articles and artifacts gifted by grateful devotees whose prayers have been answered. There is a hodgepodge of all kinds of objects from body parts fashioned in silver (to cure diseases or ailment) to gold and silver jewelry, pens, even stethoscopes and models of houses. It’s quite amazing.

There is also a Depot in the Church complex which sells various items like pictures, idols, books, CDs, Calendars, Bibles, and Rosaries etc. Holy oil and water are also available in this depot.

Three Holy Masses are offered daily in our Basilica;

On Sundays and Feast Days: