Schwartz Church takes pride of place as one of the oldest churches of south India and was constructed during the reign of British in India. Today, it is not only a key tourist destination of Tamil Nadu but also has huge religious significance. Schwartz Church in Thanjavur is a legacy of the city’s colonial past. It is located in the Thanjavur Palace garden. The church is surrounded by pretty lawns and has many trees, making it a tranquil retreat from the chaos of the city.

The Schwartz Church adjacent to the Sivaganga Park in Thanjavur was built by Raja Serfoji, the great Maratha King, in 1779 AD to show his admiration, gratitude and respect for the Danish Missionary, Rev. Friedrich Christian Schwartz who was born at Sonnenburg, Prussia. Schwartz Church is still seen as a sign of open-mindedness and secular attitude of the rulers towards various religious beliefs. 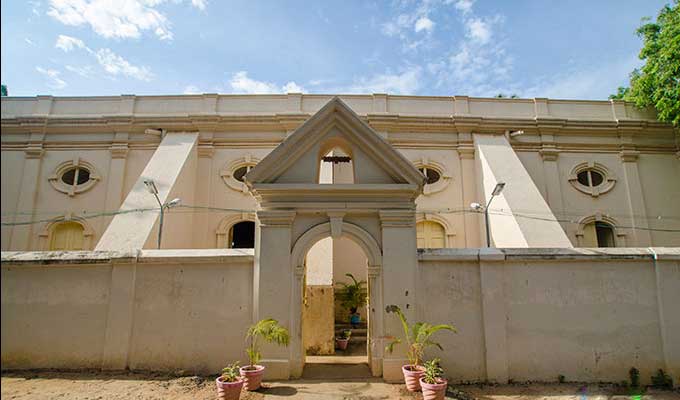 Fr. Schwartz was his tutor and mentor. His saintly approach and integrity left a good impression on the young Raja. Schwartz was instrumental in getting the kingdom from the British who were about to take over Thanjavur region as there was no legal heir. He was not happy with the British rule and frequently complained of the insincerity and avarice of the British.

In the Church, there is a monument or tablet made by John Flaxman on the orders of the Raja of Thanjavur that shows the King holding the hand of the dying Lutheran missionary-evangelist whilst receiving his blessing. The monument is in white marble and is a popular attraction for tourists. 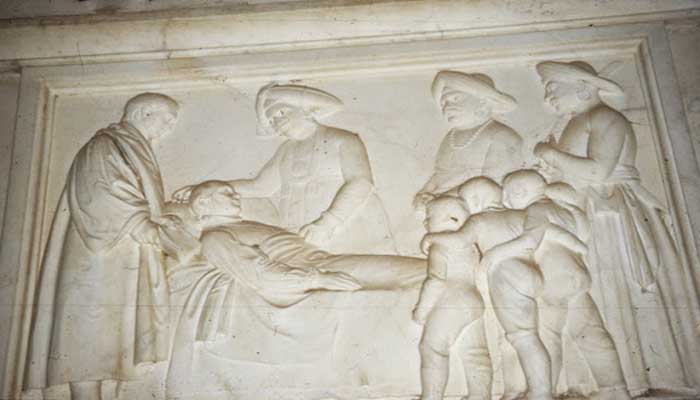 A legacy of Thanjavur’s colonial past, Schwartz Church continues to be cited as an important shrine by believers of the Christian Faith of the God’s work being carried across the seas by those entrusted with it. Rev. Schwartz was an early pioneer in the field of education and was responsible for founding many Christian mission schools in this area to impart education to the natives. He was the first to introduce English in St. Peter's school of Thanjavur. This school is one of the oldest schools in India.

Schwartz used to live on the church premises in the north-west part of the church. Schwartz in his capacity as a Danish priest had close relationship with the British East India Company and was quite familiar with higher officials at Madras. There is a monument to Rev. Schwarz by John Bacon arranged by the British East India Company in St Mary's church at Chennai (formerly Madras). There is a well-known school named after Rev. Schwartz in Ramanathapuram, Tamilnadu and Abdul Kalam, the former President of India, was an old student of that school.

Schwartz Church was constructed by Raja Serfoji in 1779 AD as a token of his affection for the Danish missionary, Reverend Frederick Christian Schwartz. The Nayaks and the Cholas controlled the kingdom of Thanjavur somewhere in the 17th century. Later, the Marathas reigned over Thanjavur and made this city the capital of their kingdom. The English overpowered the Marathas in 1749 and instated power in the region. Later, the French too entered the power struggle. Schwartz Church was planned and constructed under their control during this time. 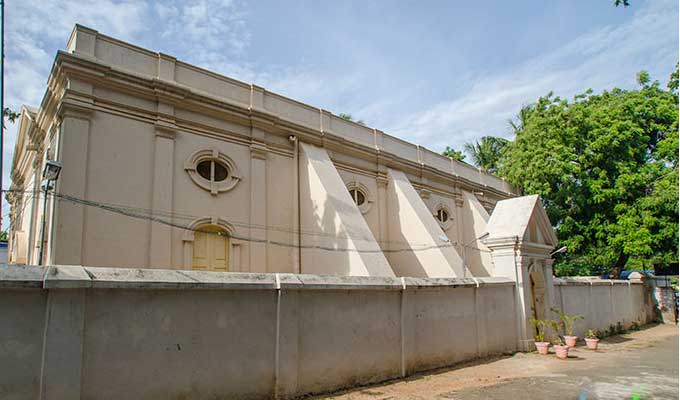 At a distance of 2 km from Thanjavur Railway Station & 750 km from Old Bus Station & 500 meters from Brihadeeswarar Temple, Schwartz Church, also known as Fort Church, is located near Brihadeeswarar Temple in the Thanjavur Palace garden just north of the Sivaganga Tank, was built by Raja Serfoji in 1779 in appreciation of his teacher, the Danish missionary FC Schwartz who died in 1798. 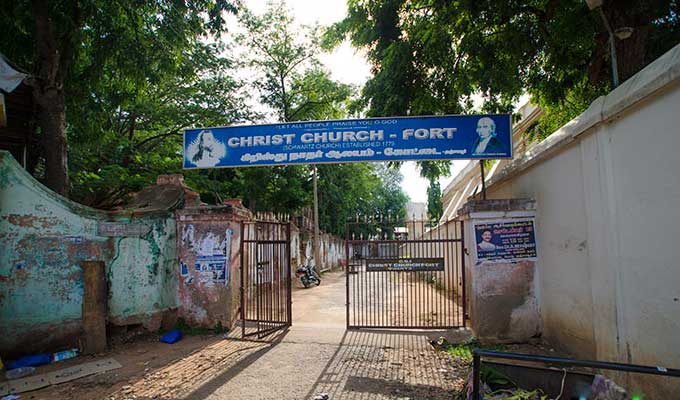 When Schwartz died in 1798, Serfoji II, the Maratha ruler donated a striking piece of white marble that was made by John Flaxman and this is seen at the western end of the Schwartz church. The marble piece has engravings showing the dying missionary, blessing King Serfoji surrounded by his ministers.

It is believed that the constructions of Schwartz Church took place somewhere during the late 17th and early 18th century. That’s why; it mirrors the heritage settings of Thanjavur of that era.

For instance, the architecture and design in the Church has a typical French touch while the amazing arches, the gateway and the foreground heights are also reminiscent of French style of construction. 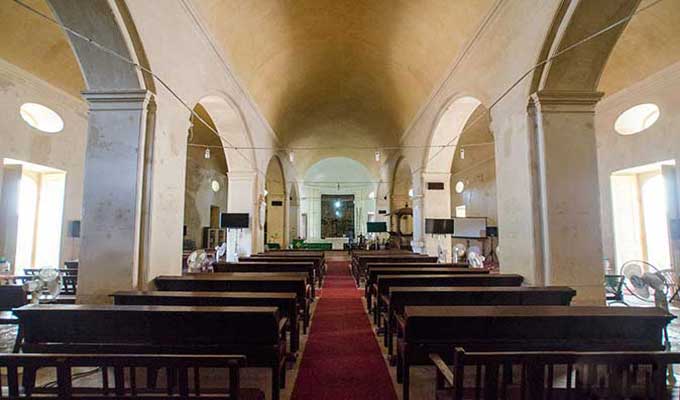 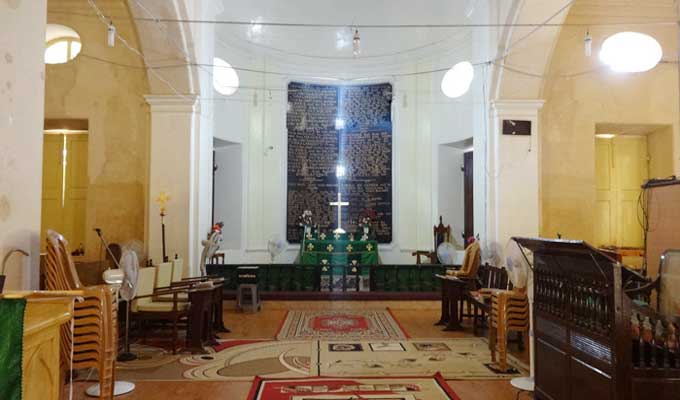 Schwartz Church is a tranquil and lovely place. It’s most famous attraction is a marble tablet. When he died, Serfoji donated this tablet, made by John Flaxman, to Schwartz Church and you can see it even today at the western end of the church. The tablet portrays the dying missionary sanctifying his royal patron who is encircled by ministers and students from the school he founded. Check out the striking carvings on the tablet. The architecture of the church shows a distinct French influence in its arches, elevation and the doorway. The peaceful environs of the church, with its luxuriant green lawns and trees, will make you forget that you are in the middle of a crowded city.

The west-side of the church is famous for its amazing marble tablet that was given by the Maratha ruler of those times, Serfoji II. It was gifted in 1779 when the Danish missionary breathed his last. The tablet represents the Father amongst his ministers and pupils from the school that he helped establish. The church is known for its greenery and natural surroundings. There is lots of greenery around the place that makes the church surroundings serene and peaceful, the perfect setting for a religious place.

The best time to visit the church is from October through March. The church is open from 0600 Hrs to 1900 Hrs on all days of the week. There is no entry fee charged by the authorities. Pets are not allowed.

Thanjavur is well-connected to other parts of the state by state transport buses. The road network is excellent.