Our Lady of Velankanni
Nagapattinam

Velankanni is home to one of the country's biggest Catholic pilgrimage centres. The Catholic Basilica devoted to Our Lady of Good Health is popularly known as the "Lourdes of the East". The origins of this church can be traced back to the 16th century and its founding is attributed to three miracles : The apparition of Mary and Jesus to a slumbering shepherd boy, the curing of a lame buttermilk vendor, and the survival of Portuguese sailors assaulted by a violent sea storm. It is built in the Gothic style, was modified by Portuguese and then further expanded later on due to the influx of pilgrims. The church building was raised to the status of basilica in 1962 by Pope John XXIII.

Tradition recounts that Mother Mary appeared with the Infant Jesus in this small hamlet at the end of the 16th or in the early 17th century. Ever since, Velankanni is the most important destination and almost the synthesis of all Marian Sanctuaries for the pilgrims of the world. The crowds of pilgrims come here regardless of creeds and languages. 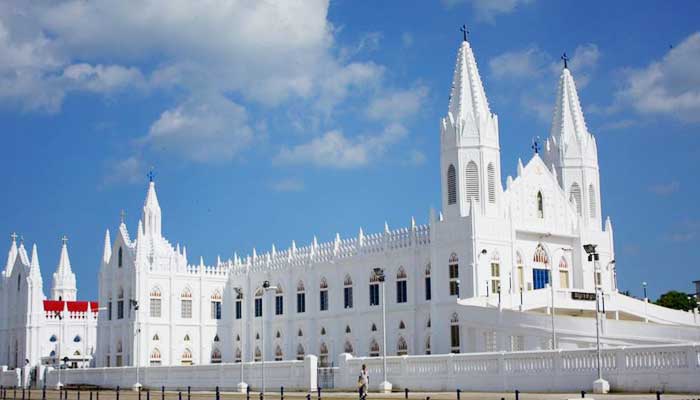 Our Lady of Good Health, also known as Our Lady of Velankanni, is a celebrated Catholic title of the Blessed Virgin Mary believed to have appeared in Velankanni Town, Tamil Nadu, India. According to traditional beliefs, the Marian apparition is said to have occurred to a young boy delivering milk to the neighbourhood when the Virgin Mary, carrying the child Jesus, is said to have appeared. This apparition has not been approved by the Holy See.

The Basilica of Our Lady of Good Health erected by the Portuguese and the Indians stands at this site. The iconic depiction of the Madonna is unique in that it is one of two only icons where Mary is portrayed wearing an Indian Sari, while the other statue is said to have been buried with Aurangzeb, the Mughal Emperor. The basilica is known as a site for pilgrims from all over India and its assembly of multilingual prayers every Christmas.

There are no historical documents or records about the apparitions of Mary at Velankanni. Oral tradition is the source for the two apparitions of the Blessed Mother of Velankanni in the 16th century and the saving of the Portuguese sailors from a tempest in the Bay of Bengal in the later 17th century.

The first apparition is said to have occurred in May of 1570, when a local shepherd boy was delivering milk to a nearby house. Along the way he met a beautiful woman holding a child, who asked for some milk for the little one. After giving her the milk, he continued on his way, and upon making the delivery discovered that the jug was now completely full of fresh, cool milk. A small shrine was built near the site where the boy encountered the woman, a location that came to be called Matha Kulam, which means Our Lady’s Pool.

The second apparition is said to have happened in 1597, not far from Matha Kulam. A beautiful woman with a young boy in her arms appeared to a young crippled boy selling buttermilk. The little boy asked for some buttermilk, and after he drank it, the woman asked the boy selling buttermilk to visit a gentleman in the next town and ask him to build a chapel in her honor at that location. The boy set out quickly and realized that he was no longer lame. A small thatched chapel was quickly built in honor of Our Lady of Health, called in Tamil “Arokia Matha.”

The third incident occurred when a Portuguese ship sailing from Macau to Sri Lanka was caught in a storm in the Bay of Bengal. They invoked the help of the Blessed Virgin under her title "Star of the Sea". The storm subsided and the 150 men on board were saved. It was September 8, the Feast of the Nativity of Mary. In thanksgiving, the sailors rebuilt the Shrine to Our Lady of Good Health, and continued to enhance it whenever their voyages brought them to the area. 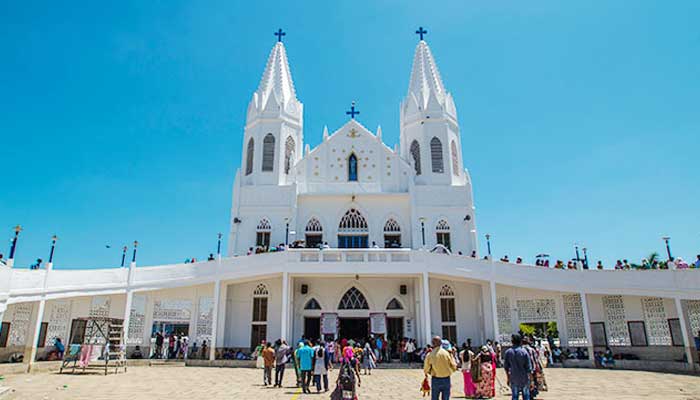 The shrine that started as a thatched chapel in the mid-sixteenth century became a parish church in 1771 when Catholics in India were under persecution from the Dutch. Later in 1962 it was granted a Special status of a Minor Basilica by Pope John XXIII. The shrine of Velankanni was elevated to the status of 'Minor Basilica' and merged with the Major Basilica of Mary (Mary majore) in Rome on 3 November 1962 by Pope John XXIII. 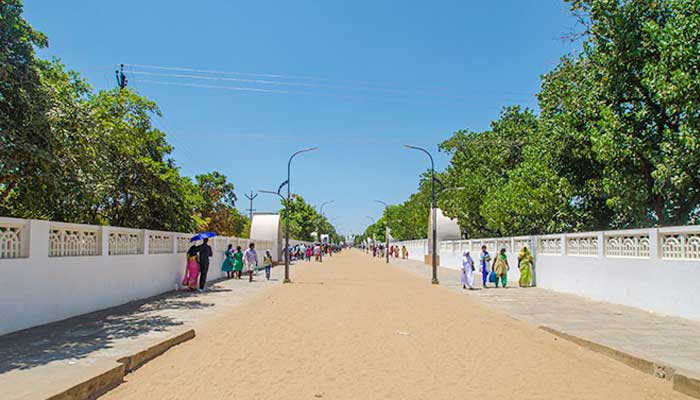 Until 1847 the priests of St. Franciscan Missionaries who had looked after the province of Goa and Mylapore also looked after Nagapattinam and Velankanni. The Franciscan origin and ownership of the Shrine was also perpetuated, by giving the place of honor to two Franciscan saints, St. Anthony of Lisbon and St. Francis of Assisi, on either side of the miraculous image of 'Our Lady', on the High Altar until 1961. Besides the last parish priest, Miguel Francisco Fernandez, who was of the Franciscan order, controlled the parish of Velankanni till 1889. In 1890 the parish was handed over to diocesan priests.

Thereafter, the diocesan priests of the Diocese of Mylapore were in charge of Velankanni. In 1952, when the new Diocese of Thanjavur came into being, and Velankanni became a part of the new diocese, the priests of Thanjavur Diocese became the custodians of the Shrine. The administration of the new Diocese was imagesorarily placed under the apostolic administration of the Rt. Rev. Dr. Louis Mathias, S.D.B., who was then the Archbishop of the new Archdiocese of Madras-Mylapore.

On March 19, 1953, His Excellency the Rev. Dr. R. Arokiasamy Sundaram, DD., L. C. L., M. A., a priest of Mylapore Archdiocese was appointed as the first Bishop of the new Diocese of Thanjavur. He assumed charge of his Diocese on March 24, 1953. Velankanni being situated in the Thanjavur District came under the jurisdiction of the Diocese of Thanjavur. The Rev. Dr. R. Arokiasamy Sundaram showed keen interest in the development of Velankanni Shrine and granted special spiritual privileges. 'Our Lady of Health Velankanni' became the second patroness of our newly erected Diocese.

Elevation of the Shrine to the status of a Basilica:

The greatest honour that can be conferred to a Church is to elevate it to the status of a Basilica. The word ‘Basilica’ is derived from the Greek word ‘Basilike’ and it originally signified a Royal Hall. In course of time this word has come to mean a large and beautiful hall. In ancient times kings from all over the world in general, and from Rome in particular, constructed large hall for administrative purposes. The first hall bearing the name of Basilica existed in Athens.

Jesus Christ being the King of Kings, and His Churches being His audience halls, the larger Christian Churches in Rome came to be called Basilicas. Today, a Basilica is a consecrated Church usually built with the front facing the East, and generally constructed in one of the classical styles of architecture. It is oblong in shape with a broad nave ending in an apse. It is now stipulated that a church, in order to be called a Basilica, should contain some work of art, or it should contain some work of art, or it should house the body of a saint or a celebrated image much venerated in the land, or be a pre-eminent place of pilgrimage. 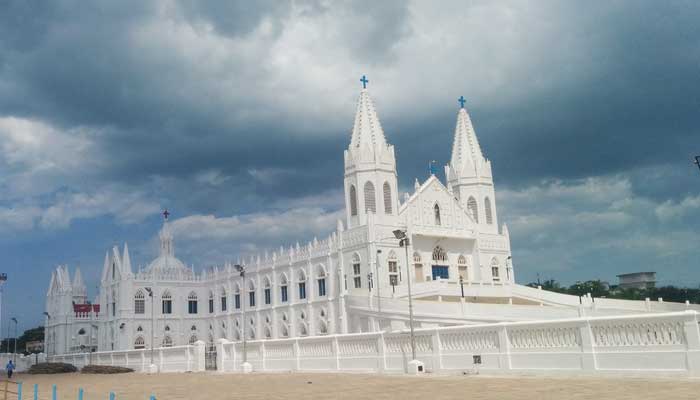 His Excellency, Dr. R.A. Sundaram D.D., L.C.L., M.A., the first Bishop of the diocese of Thanjavur, earnestly petitioned Pope John XXIII to raise the Shrine of Velankanni to the Status of a Basilica and also requested His Holiness to enrich it with all the privileges attached to a Basilica for the spiritual benefit of the pilgrims.

September 8, the Feast of the Nativity of Mary, is also commemorated as the feast of Our Lady of Good Health. The celebration starts on 29th August and ends on the day of the feast. The feast day prayers are said in Tamil, Malayalam, Telugu, Kannada, Konkani, Hindi and English.

The Shrine office functions from 9.00 a.m. to 5.30 p.m. with a break for lunch between 12.30 noon to 2.00 p.m. Sundays, New Year Day, Good Friday and Christmas are holidays for the office. The office is a prime help to the Rector and Priests; backbone of the administration besides dealing with Sacramental records.

Open from 6.30 a.m. to 8.00 p.m. every day. Offerings of gold, silver other metals and kinds, received from pilgrims, are displayed here. The Museum stands as a live-witness to Our Lady's blessings upon her devotees and to the gratitude of pilgrims.

The depot is at the ground floor of the parachial house, displays religious articles, statues, audio & video cassettes. It has a branch at Our Lady's Tank. In the beginning, it was known as Legion of Mary book depot.

A book stall known as 'Annai Book Centre' is located in the museum with its branch down the museum.

Our Lady of Health Hospital with a dispensary.

A Tamil language movie was made in honor of Our Lady of Good Health with the title Annai Velankanni in 1971. The movie was directed by K. Thankappan, starring major stars of Tamil cinema including Gemini Ganesan, Kamal Haasan, K. R. Vijaya, and Padmini.

The nearest airport is Tiruchirappalli airport (4 Hrs by Bus)

Next nearest Airport is Chennai (9 Hrs by Train)


Velankanni railway station is the nearest railway station on the 10 kilometer long Nagapattinam - Velankanni broad gauge line. The foundation stone of the line was laid in 1999 and it was completed in 2010 at a cost of Rs. 48 Crores. The line is part of the Tiruchirappalli railway division of Southern Railway zone of the Indian Railways.

The Velankanni – Chennai Egmore Link Express runs daily with only four coaches from Velankanni, which then is coupled with Kamban Express at Nagapattinam Junction for its journey towards Chennai. The weekly Velankanni Express between Vasco da Gama, Goa and Velankanni is operated by South Western Railway zone. Apart from the express trains, two passenger trains are also operated daily, one each to Karaikal and Nagapattinam. Special trains are operated from places like Chennai, Mumbai, Vasco da Gama, Trivandrum and Nagercoil during the months of August and September for the annual church feast.