Rahu is a severed head of an asura swallows the sun causing eclipses according to the Hindu tradition. He is depicted as a serpent with no body riding a chariot drawn by eight black horses. Rahu and Ketu are respectively called the north and the south lunar nodes. 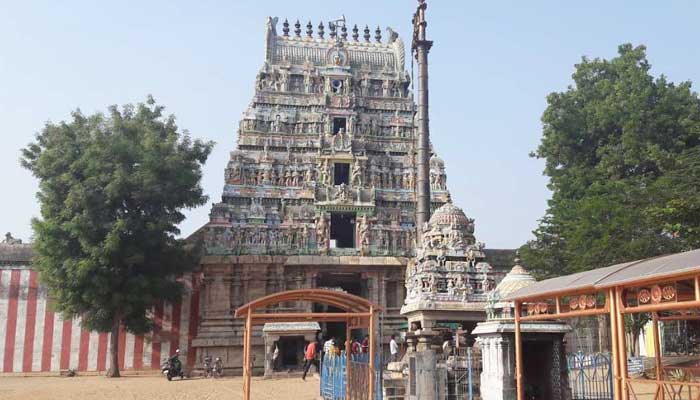 During the Samudra manthan, one of the best episodes in the Hindu mythology the asura Rahu drank some of the amrita (divine nectar). The sun (suryan) and moon (chandran) realized it and alerted Mohini (the female avatar of Vishnu). Mohini take off the asura's head before the nectar could pass his throat. The head remained immortal due to the effect of amrita and became Rahu. This immortal head from time to time swallows the sun, causing eclipses. Then, the sun passes through the opening at the neck, ending the eclipse. Lunar eclipse is due to kethu to swallows the moon on timely basis.

Rahu is considered as incarnation of Shakti in beast form according to the ancient Tamil astrological scripts. Temple dedicated to the Ragu is Rahu Stalam located at Tirunageswaram, a village in the outskirts of Kumbakonam. Shiva is worshiped as Naganathar and Parvati is depicted as Piraisoodi Amman. The presiding deity is revered in the 7th century the Tevaram. This Tamil Saiva canonical work is written by the nayanars. Ragu Sthalam is classified as Paadal Petra Sthalam. The temple complex houses many halls. The most notable is the ornamental entrance hall built during the Nayak period. Design and style of the Ragu Sthalam is good example for Chola style of architecture. Aditya Chola I in the 10th century A.D have built the temple. Later rulers have modified the temple with their own tastes. Ragu Sthalam is also called as Sri Naganathaswamy Temple. Main feature of Naganatha Swamy temple is that Lord Rahu is seen with human face.

Rahu Bhagwan is said to be the cause for one's good position, status, faithfulness and winning over opposition. It is believed that by doing), A person to be stay away from the ill-effects of Kalasarpa Dhosha, Kalasthra Dhosha, Sarpa Dhosha and the delay in getting married, childlessness, troublesome married life are be cured by doing Milk abishekam for Rahu during Rahu kalam (period of 1 and 1/2 hours occurring every day). During milk abhishekam, the milk when poured over the idol turns Blue which is clearly visible.