The Thanjavur Maratha Palace Complex, known locally as Aranmanai, is the official residence of the Bhonsle family who ruled over the Tanjore region from 1674 to 1855. The original name of Thanjavur Palace is Sivaganga Fort, which is rarely used these days. If you observe carefully, there is even a small moat around it which provided security against enemy access. Often mistakenly called the "Thanjavur Maratha Palace" was not built by Maratha Kings, but by Thanjavur Nayaks. However, the Marathas made some enhancements to suit their needs. It is more popularly called "Thanjavur Aranmanai" by the people of Tamil Nadu.

Thanjavur’s royal palace is a mixed bag of ruin and renovation, superb art and random royal paraphernalia. The maze-like complex was constructed partly by the Nayaks who took over Thanjavur in 1535, and partly by a local Maratha dynasty that ruled from 1676 to 1855. The two don't-miss sections are the Saraswati Mahal Library Museum and the Art Gallery. 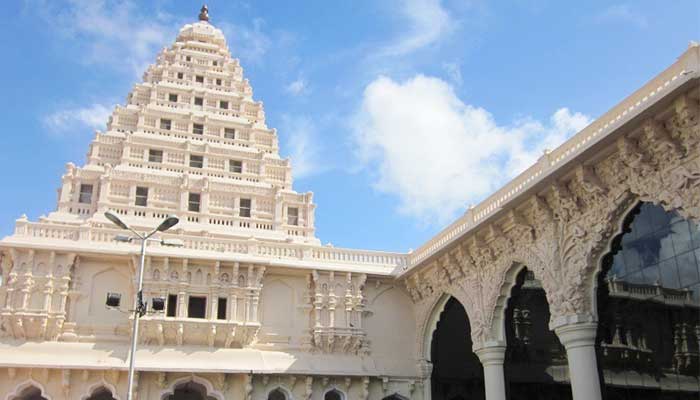 Seven different sections of the palace can be visited – and you'll need three different tickets to see them all. The Art Gallery and Saraswati Mahal Library Museum are included in the ‘full’ ticket, along with the Mahratta Darbar Hall, the bell tower, and the Saarjah Madi. The main entrance is from the north, via a lane off East Main Street. On the way in you’ll come to the main ticket office, followed by the Maratha Palace complex.

Past the ticket office, a passage to the left leads to, first, the Royal Palace Museum, a small miscellany of sculptures, weaponry, elephant bells and rajas’ headgears; second, the Maharaja Serfoji Memorial Hall, commemorating the enlightened Maratha scholar-king Serfoji II (1798–1832), with a better collection overlooking a once-splendid, now crumbling courtyard; and third, the Mahratta Darbar Hall, where Maratha rulers gave audience in a grand but faded pavilion adorned with colourful murals, including their own portraits behind the dais.

Thanjavur, the capital city of Cholas, is a flourishing city from the 7th century CE. At present there are two important forts namely Chinna Kottai (Little fort) and Periya Kottai (Big fort). Thanjavur Palace is situated within the Big Fort Complex. After the fall of Cholas in 1279 A.D, and a few centuries of Pandyan occupation, Sevappa Nayak captured Thanjavur and became the King in 1532.

The Thanjavur Maratha palace was originally constructed by the rulers of Thanjavur Nayak kingdom. The construction of Thanjavur Palace began in 1534 and was completed in 1535, thanks to plenty of local prisoners of war who provided manual labor. 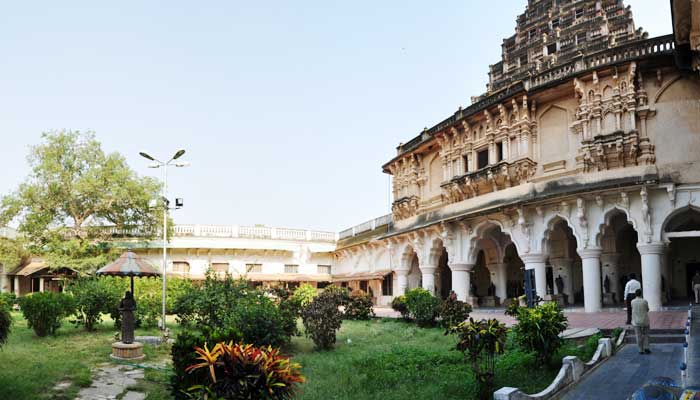 The Palace was officially called "Sivagangai Fort" and was held by the Nayak family until April 1674, when the Maratha ruler Venkoji captured it. After the fall of the Thanjavur Nayak kingdom, it served as the official residence of the Thanjavur Maratha. The Marathas enhanced the original structure and expanded the palace complex.

The Thanjavur Palace is a huge complex that has many architectural features. The massive complex consists of huge halls, wide corridors, multi-storied observation towers and a shady courtyard. As you walk across, you can see that some parts of the complex are in ruins while other parts show that restoration work has been taken up to revive and protect the monument.

Another intriguing feature is the extremely narrow staircases with short steps, sharp turns and low ceilings. This was a measure to prevent enemies' rapid advance. Cavalry advances would be impossible through the stairs, and the foot soldiers cannot climb up with great speed. The enemy foot soldiers would be easy prey to the men waiting for them above. Again: this was built as a fort, not a palace. 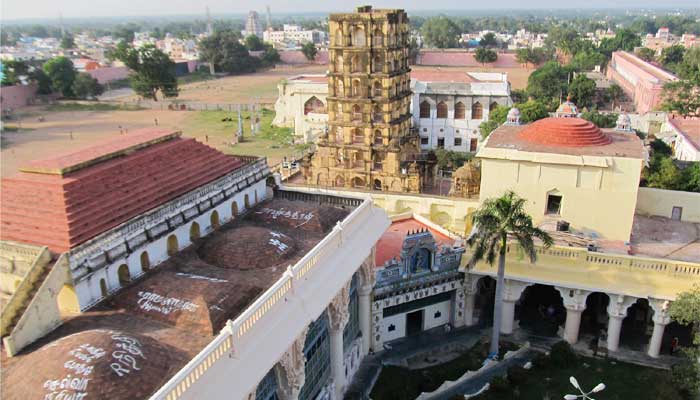 The State Department of Archaeology protects the important monuments in the palace complex, such as Arsenal Tower, Bell Tower, Darbar hall of the Marathas and Sadar Madi (Sarjah Madi). The Raja Serfoji Memorial Hall and the Royal Palace Museum are situated in the Sadar Mahal Palace. TheSaraswathi Mahal Library is situated with the Thanjavur palace complex.

Thanjavur Palace with its architectural beauty reflects the ‘Marathas’ and ‘Nayaks’ patronage towards art and culture. Paintings in the Darbar hall depict the scenes from epic Ramayana and stucco figures of Gods and Goddesses are well projected on the walls and ceiling.

Gooda Gopuram, the Arsenal Tower, is 192 feet height with eight storeys. It was constructed during the period of the Marathas in 1855 CE. It was used as a watchtower and an armory to store weapons and ammunition imported from European countries. After the English captured the palace in 1855 CE, all the contents were transferred to Tiruchirappalli, in 1863.

The initial building was constructed by Nayaks in 1645 with only 2 floors. The Marathas later renovated and finished the tower in 1855, and used it for various military purposes. The top floor was used as a watch tower, and the remaining floors were used to store arms and ammunition. The second floor was exclusively used for the King's martial arts training. 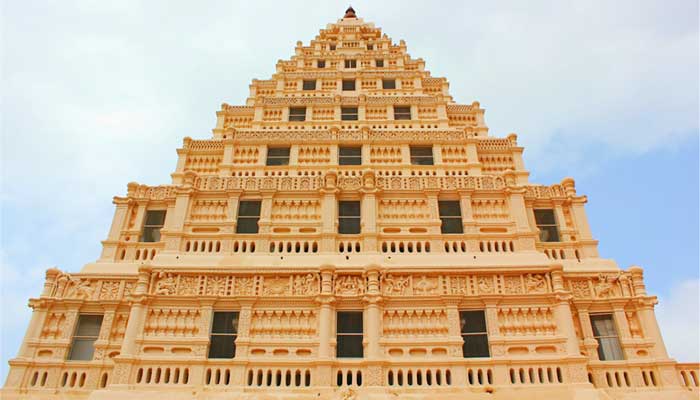 A dead whale's skull is found in this section. From this tower, one can get bird view of Brihadeeswarar Temple Vimana. Arsenal Tower is a structure, which attracts the visitors to Thanjavur even as the Tower of the Big Temple does. This Arsenal Tower is 190 feet height with eight storeys and was constructed in 1855 CE during the period of Marathas. 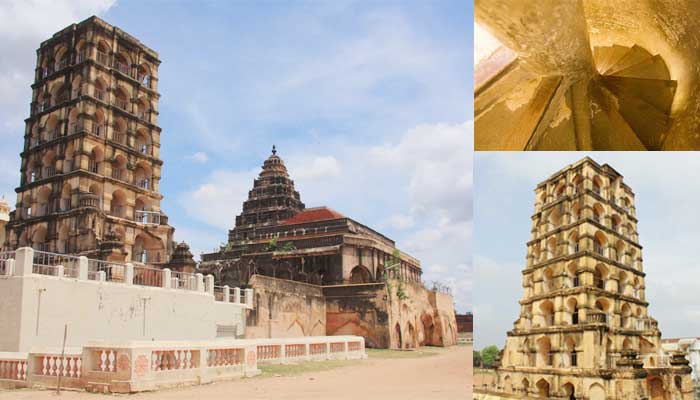 Bell tower is situated in the Northwestern side of the Arsenal Tower. This tower is also known as “the wide holed ear pavilion” to the public and designed in the style of the Gingee Nayaks. The seven-story bell tower has superb views of the Big Temple and a bird’s eye view of the city of Thanjavur.

It is also believed that Vijayaraghava Nayakkar climbed it every day at noon to worship the towers of the Srirangam Ranganatha temple, visible from the top of this tower.

Today this tower has only seven storeys though it is said to have been higher with more levels that were damaged by thunder and lightning. A research note says that there was a huge and unusual clock on the tower in which the figure of a monkey used to strike the gong every hour.

There is nothing particularly found in the Bell Tower. People use this place to climb up and get aerial view of Thanjavur city. This is another interesting building with a construction style exactly opposite to the Arsenal Tower. It looks like rectangular construction resembling the modern day skyscrapers. Maadamaaligai in Tamil describes it accurately - Rectangular Mansion.

This building is shorter than the arsenal tower and has 7 floors. It once housed a mechanical bell which rung every hour from the top. The people of Thanjavur used it as their time teller. For this reason, this building is also called as "Manikoondu".

The Sardar Mahal is more than 175 years old and is situated north to the Krishna Vilas Tank, which is now closed. This hall was the residential palace of King Serfoji and his descendants. Performing arts like drama, dance, music and other art forms were performed at the Sadar Mahal Palace. Proof of this is evident from the Marathi Modi documents in the Saraswati Mahal library.

The eighth World Tamil Conference gave a new lease of life to these Mahals, which are now preserved by the Department of Archaeology, State Government of Tamilnadu. The arts and artefacts collected by King Serfoji are displayed in the erstwhile Residential palace of Serfoji.

This was opened to the public on 12th October 1997. This was done with the aim of showcasing the contribution of the Maratha kings to Thanjavur and to South Indian culture and literature and also to make the general public aware of their history.

The Palace was named Rajah Serfoji’ s Memorial Hall in 1997 and was registered as a trust with Srimant Tulajendra Raja P Bhosle, a descendant of Rajah Serfoji. The hall was restructured and repainted; it originally had some stucco work on the upper borders of the wall. On display are household articles, costumes, gold and silver ware, armouries, earthenware, manuscripts, wooden and ivory objects, various kinds of paintings like oil, water colour and so on.

A small garden has been developed at the place where the Krishna Vilas Tank stood. A secret underground passage located on eastern side of the Sardar Mahal, which was in use till 1855 before being closed has also been reopened to the public. Few artifacts, paintings and coins, which were collected or used by Serfoji II, are displayed in this section of the palace. 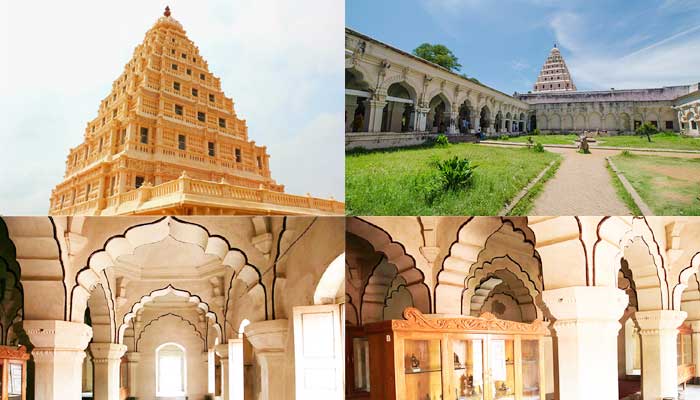 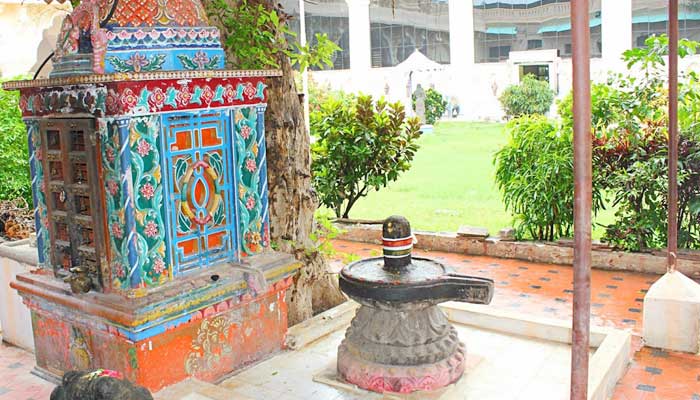 A very modest temple is located on the ground floor, inside the palace. This is the Chandramoulishwarar Temple, which was constructed by the Achuthappa Nayak in 1589. The temple has a lingam on the floor with two Nandhis (Sacred Bulls) in front.

Two small decorated enclosures are kept with locked doors, suggesting some more deities may be present inside them. Royal families held their worshiping sessions here every morning.

You can capture some very interesting details, if you have the eye for it. Most sculptures are well labeled and the most interesting carvings were done during the Chola period. 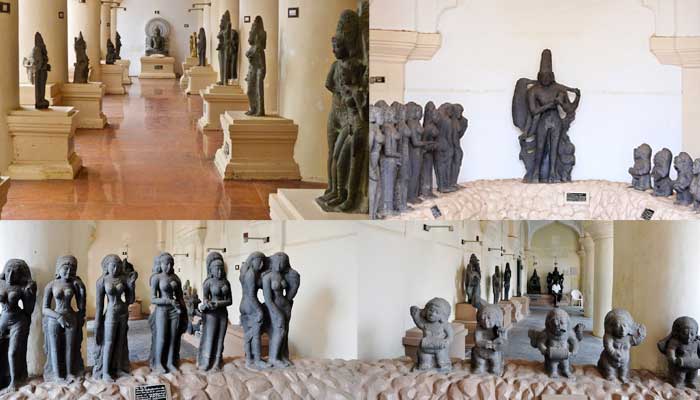 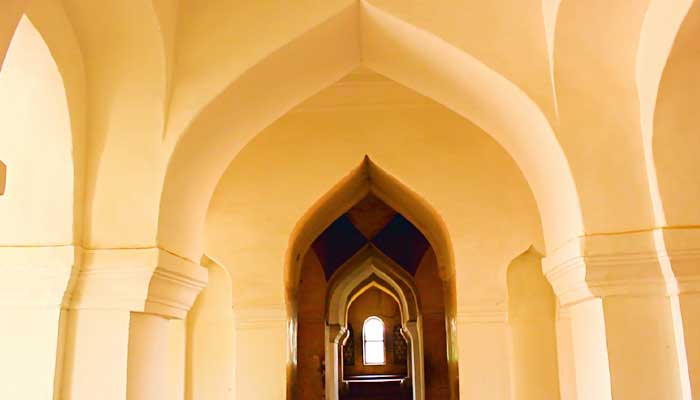 There are at least 3 hidden chambers with secret, interconnecting doors. These were used as torture chambers and to have discreet meetings. One hidden chamber, located at the base of the Arsenal tower is acoustically designed in a way that you can hear even the smallest whisper from 3 floors above.

This must have been used as a way for sending secret voice signals over multiple floors. Sadly, the Government has completely prohibited all access to these hidden chambers.

Sharjah Mahdi is the Royal balcony, that is located in the eastern part of the Thanjavur Palace Complex.

The balcony has been decorated with wooden carvings.

The renovated Sharjah Mahdi is best admired from East Main Rd for its ornate balconies. 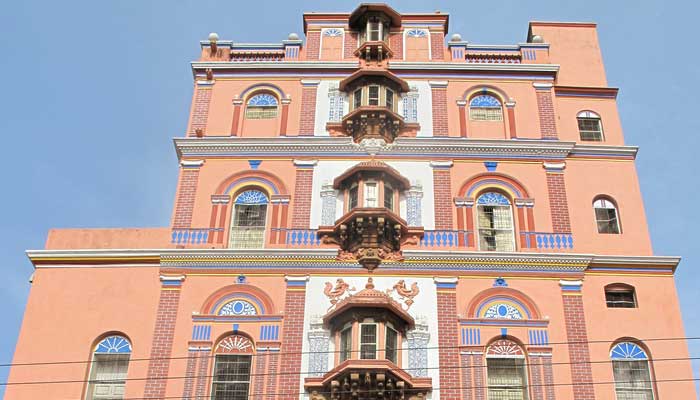 There are two underground passages in the palace, only one of them is partially accessible by tourists.

This is a relatively short passage and the Government is renovating it as of 2014. Another secret tunnel which is a mile long connects the Brihadeeswarar temple and the palace.

It is wide enough to ride 2 horses in parallel, and was designed as a getaway route by Kings during war times.